…on your heart (forever). Mike & I have owned several rescue dogs. Our latest, of course, is General Max. Before Max, we had Hoss and Walter. Hoss was a huge Rottweiler; the sign on his crate when we adopted him was “Hoss: The Gentle Giant.” He definitely was. Although he was a large as a small bear, he rarely barked and was such a love. Walter was as old as dirt when we got him, but he was full of life. He charged through life with abandon. Both of them died just the way they lived. Hoss died quietly in his sleep; Walter was running up a hill on a walk and just fell over dead.

My dear friend Susan had a Golden Retriever named Emma. I found out yesterday that Emma passed away over the weekend. Emma was a member of the family, and I know her passing has left a huge hole in Susan’s and her husband Rob’s hearts.

I shared a card similar to this a few weeks ago. It’s a CASE from my demonstrator friend Pam Irwin. 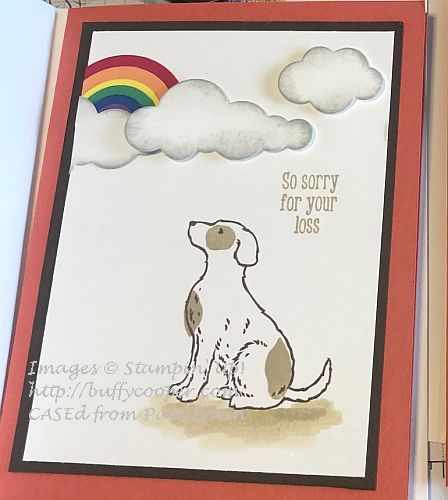 The card I shared earlier used the cat from Nine Lives instead of the Happy Tails dog, but it’s the same idea from Pam. This isn’t Susan’s sympathy card; I don’t like to share a card I made for someone specific until they actually see the card in person. But I wanted to have something to show you today. (It’s my online sympathy card for Susan, though. Sending hugs and love, Susan.)

When Susan told me Emma was sick, it sounded so much like our Shepherd/Golden mix Tony. Tony was another rescue. A friend adopted him from the SPCA, then had to move back home with his parents. Tony didn’t get along with his parents’ dog, and Mike and I just happened to be visiting when they told us they would have to “re-home” Tony. Tony came home with us, of course.

Tony lived with us for a long time. He was a wonderful dog, and everyone loved him so much. Tony’s favorite thing to play with was an empty water or soda bottle. Whenever we finished one, we’d give it to Tony to chew on. He liked the crunching sound, I think.

One day, Tony seemed to have a little cold. I took him to the vet, and after some x-rays and a thorough exam, they were fairly sure he had lung cancer. We were devastated, but the vet suggested we take him to a specialist to be sure. The specialist confirmed the initial diagnosis, but there was still a small chance that it could be a fungal thing. They said he had up to a year left. Tony had other ideas.

The next day was Wesley’s birthday, so we gave Tony some of the treats from dinner – steak and a little ice cream. Later that night he tried to go off by himself, and I noticed a few spots of blood on the concrete. Mike immediately picked Tony up and brought him to the family room. Several hours later, he passed away with his family around him.

It was very sad, as anyone who has lost a beloved pet knows. But they do leave their paw prints on your heart forever. We have so many wonderful memories of all our pets who have crossed the Rainbow Bridge, and although it hurts so badly to lose them, I wouldn’t trade the memories and chuckles we share over their antics for anything. Susan – I’m hoping that the wonderful memories you have of Emma will help ease the pain of losing her.

By the way, we did have a birthday do-over for Wesley several months later. And we all ate an extra bite of ice cream in Tony’s memory.

Among other things, I am a musician who enjoys papercrafting (specifically with rubber stamps), a Stampin' Up!® demonstrator, Christian, wife and mom to two great boys.
View all posts by buffycooper →
This entry was posted in Happy Tails and tagged Card Making in Winchester VA, Happy Tails, paper crafts, pets, rainbow bridge, Rubber Stamping, stampin' up, Stampin' Up! Demonstrator Winchester VA. Bookmark the permalink.

4 Responses to A Best Friend Leaves a Paw Print…