Another Peek at Painted Poppies

Another Peek at Painted Poppies

Hi, there, stamping friends! I hope you’re having a lovely day. I’m finally posting today’s blog, so I’m either late for Monday or early for Tuesday. My goal is to get back on track with scheduling them for a week or more ahead of time, but December has not been a nice month for me.

My dear granddaughter Amelia is the sweetest, kindest, and loving little girl I know. And she loves to share. About three weeks ago, she shared her upper respiratory ailment with me. I think it was just a cold, but Mike and I, as well as her dad and mom all caught it. It eventually morphed into non-communicable things (bronchitis for poor Stephanie and a sinus thing for Wes and me), but it’s taken some time for some of the adults in her life to feel like we’re not members of the living dead. Weird fact: Amelia never felt bad. She was cheerful and happy and never had an ache or a pain. (Oh, to be a kid again.)

Anyway – I finally got most of my energy back and was ready to face the world. And then my mom sent me a text saying that she thought my dad may have had another stroke. NOOOOO! He was just starting to feel better!

Turns out it was a bacterial strep infection he got from a dental procedure a few days earlier – not a stroke. (And people wonder why I don’t like going to the dentist!) Anyway – he’s home and getting back to his old self.

I was able to shop a bit today to catch up on Christmas gifts. Mike had bought Jon’s, and I got some things for the girls online. Wes said he only wanted money, but kids have to have something to open, if when they’re in their late 20s! So I called Mike to tell him I was on the way home and I had put a serious dent in the shopping. He asked what I had gotten, and I realized the only person I had bought gifts for was…Amelia. So I guess I have another day of shopping ahead of me!

Still – with all this craziness, I found some time to create this Painted Poppy Card. Mike & I celebrated our 37th wedding anniversary shortly before Thanksgiving, and I CASEd a card from one of my cousins. for this. 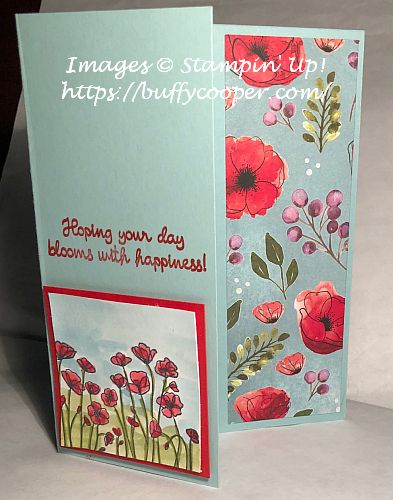 I cut about 2″ off the front of the Pool Party card base, the added some of the Peaceful Poppies Designer Series Paper (DSP) along the inside back of the card.

Next, I stamped the poppy field in Tuxedo Black Memento Ink on Whisper White Cardstock, then colored the poppies with Poppy Parade and Old Olive Stampin’ Blends. After I added some Balmy Blue sky and Old Olive grass with an Aqua Painter, I adhered the stamped card stock to a Poppy Parade Square and added it to the front flap of the card.

Finally, I stamped the sentiment from the Varied Vases Stamp Set in Poppy Parade ink.

You are going to love the new January – June Mini Catalog! If you would like one, as well as a Sale-a-bration brochure, let me know!

Among other things, I am a musician who enjoys papercrafting (specifically with rubber stamps), a Stampin' Up!® demonstrator, Christian, wife and mom to two great boys.
View all posts by buffycooper →
This entry was posted in Sneak Peeks and tagged card making Wincheter VA, January-June Mini Catalog, Painted Poppies, paper crafts, Rubber Stamping, Stampin' Up!, Stampin' Up! Demonstrator Winchester VA, Varied Vases. Bookmark the permalink.

10 Responses to Another Peek at Painted Poppies