When I was in college, Dr. Tom Albert, my theory professor, used to say, “There is almost never a ‘never’ or an ‘always’ in music.” He was right (of course; he was the professor), but I’m not going to nerd out and give you examples. The point was, don’t use extremes when you’re discussing music, because there are always exceptions.

The same is true in life. My mom announced on a national radio program in the 50s that she would never marry an “apple knocker.” My dad is an orchardist, so technically not an “apple picker,” although he has picked an apple or two. Or 2000. He and Mom celebrated their 61st anniversary in August.

I vehemently told my younger brother in 1981 that I would never marry a minister. A year later, I married Mike, who has been in the ministry for about 40 years now.

Recently, the “card in a box” was very popular. I mentioned (several times) to my friends that I would never make one, because it looked like a lot of work. Well, that was true. I didn’t make one. I made two and have ideas for a few others. 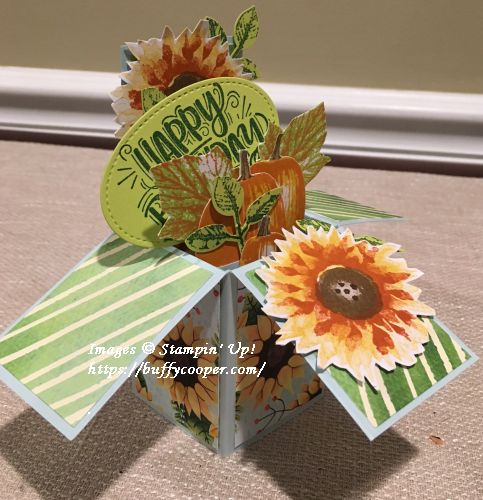 I used a card base of Soft Sky and decorated it with the Painted Autumn Designer Series Paper. All that was left was to decorate – and, of course, I used the Painted Harvest and Gourd Goodness sets. I love the realistic pumpkins, and those sunflowers are gorgeous. My pumpkin colors are Pumpkin Pie (duh) and Crushed Curry, and my sunflowers are Cajun Craze and Crushed Curry. The sunflower centers are Soft Suede and Early Espresso.

I have two sets of leaves. The Leaf Punch leaves are from Painted Harvest in Garden Green stamped on Lemon Lime Twist Cardstock. Oh – you can bundle the punch with the Painted Harvest Stamp Set and save 10%! And who doesn’t want a leaf punch? Punches are so quick and easy, especially if you’re doing multiples. The leaves from Gourd Goodness are stamped in Cajun Craze and Lemon Lime Twist.

Here’s a little tip for you. I know the two- and three-step photopolymer stamps come with numbers, and you’re supposed to stamp in that order. For most of them, the first step is the lightest color. I have learned to ignore that. I find it much easier to stamp the darker colors first. It’s much easier to line up the images that way. But feel free to do whatever is easiest for you.

The final step for this “card in a box” was the sentiment from Celebrate You. I stamped the Happy Birthday in Garden Green on Lemon Lime Twist.

If you haven’t tried this technique/fold yet, give it a try. There are lots of tutorials out there so I’m not going to “recreate the wheel,” but the easiest (in my opinion, anyway) is my friend Heidi’s. It’s super easy to follow, and Heidi has some beautiful creations.

Among other things, I am a musician who enjoys papercrafting (specifically with rubber stamps), a Stampin' Up!® demonstrator, Christian, wife and mom to two great boys.
View all posts by buffycooper →
This entry was posted in 3-D and other projects, Holiday Mini Catalog and tagged Card in a box, card making Winchester VA, Celebrate You, Gourd Goodness, Painted Harvest, paper crafts, Rubber Stamping, Stampin' Up!, Stampin' Up! Demonstrator Winchester VA. Bookmark the permalink.