It’s Friday – and by now I’m (almost) on my way to OnStage Local in Richmond, VA. Ok – honestly, when this launches, I’ll still be asleep. But I’ll be up and getting ready in about an hour. Then Sandy and I are heading out later this morning. We’re going to be super early, but both of us would rather be early than stressed out. And it will be so much fun to hang out with Sandy. I don’t get to see her as often these days, and I miss our chats!

I can’t wait to show you the things I made for my display board. I posted some projects several months ago, sent the link to Stampin’ Up!, and I was chosen to be a display stamper for OnStage Richmond. I was totally surprised, because there are some incredibly talented demonstrators who are going to Richmond. I know a lot of people didn’t even “audition,” but I finally gathered enough courage to try. I figured what’s the worst that can happen? I don’t get chosen. But I definitely won’t if I don’t try. So…besides the fun of creating, I got a HUGE box of products that will be new to the 2017-18 Annual Catalog. WOOT!

The other thing about today is – It’s Stamp-Off Friday!

This week’s challenge is “Punch a Bunch.” 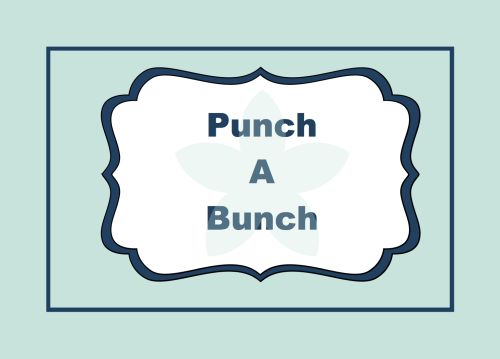 I’m fairly sure “punch” could also mean “die-cut,” but I took the literal route and used punches. In fact, I used three punches.

This card uses three of the 2016-18 In Colors (Dapper Denim, Flirty Flamingo, Peekaboo Peach) and one that will be retiring in June (Watermelon Wonder. *sad* I’m going to miss you, WW!). I also used Pear Pizzazz for some of the balloons and Soft Sky for the background.

To start off, I punched a bunch (because, hey, that’s the challenge, right?) of balloons using the Balloon Bouquet punch, then stamped a few with images from the Balloon Adventures stamp set in the Occasions Catalog. After placing the balloons, I tied a Dapper Denim Ruched Ribbon bow around the strings, then added a “celebrate” tag from Beautiful You. I finally broke down and ordered the Triple Banner Punch a couple months ago. It does make banners much easier.

The third punch I used was the Corner Punch. With all the round balloons, the square edges of the Soft Sky layer were just too sharp.

Even though there’s a lot going on with all the balloons, this is a very simple card. Now – check out what Susan & Jackie have done with the challenge. I can’t wait to see what punches (or die-cuts) they used!

Among other things, I am a musician who enjoys papercrafting (specifically with rubber stamps), a Stampin' Up!® demonstrator, Christian, wife and mom to two great boys.
View all posts by buffycooper →
This entry was posted in Occasions Mini Catalog and tagged Balloon Adventures, Beautiful You, card making Winchester VA, paper crafts, punches, Rubber Stamping, Stampin' Up!, Stampin' Up! Demonstrator Winchester VA. Bookmark the permalink.