71 years ago today, my uncle, Jennings Marston, landed on Omaha Beach. Uncle Jennings was one of the “lucky” ones who made it back home. After serving in Europe during World War II, he went to Korea during the Korean War. (I know some politicians called it a “conflict.” A conflict is when two toddlers fight over a toy. When men and women are getting killed, or coming home physically and/or emotionally scarred, it’s not a conflict; it’s a war.)

Each year on Memorial Day, Veteran’s Day, June 6, and other American holidays, my Uncle Smile sends an e-mail tribute to all the veterans in our family.  And there are lots! Dad was in the National Guard. His unit almost got sent to Korea, but they lost (or won, I guess) the coin toss. Mike’s father and step-father were both in the service. And we have lots of uncles and cousins who have served in our country’s military.

Here’s the e-mail Uncle Smile sent today. I cried my way through it, because I’m so proud and appreciative of all of our men and women in the armed forces. They deserve all the honor and every benefit we can give them.

I was only 7 years old in June 1944 but it still lingers in my mind.
Today is the 6th of  June, 71 years since the men from the Winchester, VA, National Guard Armory hit the Omaha Beach.
I remember  the first time I saw Jennings Marston in his Army uniform.  Uncle Jim Brill and I had gone to bring his cows in for milking.  We were standing by the little pond on the Brill farm.  Jennings came up to tell Uncle Jim that he had been activated and they were going to Europe.

Luck would have it that he would return after his time in Europe and live a long life.

He was always my hero and was much of my motivation
to pursue a career in the service.
Not all of our relatives would be so lucky.
I don’t think I ever met my cousin Delmer Linaburg.
He was the son of Uncle Edward Linaburg.

Delmer was 21 years old. He served in the 101st Airborne Division and was air dropped into France on the 6th of June. He was killed in action.
He did not get to come home and is buried in France. 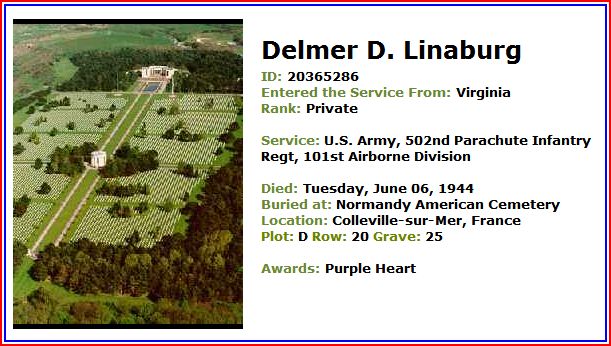 It is said that as long as people say your name, you are not really dead.  Let’s remember these and all the other “greatest generation” service men.  We will never see their like again!
May they rest in peace.
by
Major Ismail Nuri
USAF,  Ret

These service men and women are definitely worthy of honor. Uncle Jennings never talked much about the war. When Saving Private Ryan was released, my cousins took him to see it on his birthday. His daughter, Sue, asked him, “Dad, was that how it really was over there?” His answer? I think he just nodded. (Edited: Uncle Jennings did tell his son, “the only thing they got wrong was the water. It wasn’t blue; it was red.”)
So today I offer my gratitude to all who have served and those who are serving in our military. You are appreciated more than you know.
Thanks for stopping by Stamping with Buffy.  Have a wonderful day!

Among other things, I am a musician who enjoys papercrafting (specifically with rubber stamps), a Stampin' Up!® demonstrator, Christian, wife and mom to two great boys.
View all posts by buffycooper →
This entry was posted in Family Stuff, Non-Stamping Related and tagged D-Day, Delmer Linaburg, Greatest Generation, Ismail Nuri, Jennings Marston, June 6 1944, Normandy, Omaha Beach, US Military. Bookmark the permalink.