I am in a "Regal/Neutral/Subtle Rut," so decided to do something a little different.  This is just a simple little birthday card, but it's very bright! 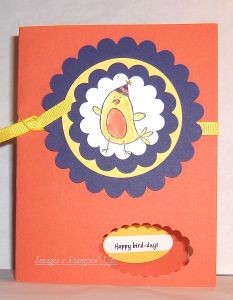 There's no sponging, no splattering, no designer paper – just a little stamping and punching.  I colored the bird ("Pun Fun) with markers, and used punches and my Big Shot for layers.  The ribbon, unfortunately, is retired, but I needed something extra and it was there, begging to be added to the card.  It's actually going to be back in the catalog – under the name "Daffodil Delight!"  Other colors are Tangerine Tango and Concord Crush.  Punches are – scallop oval, large oval, word window, 1 3/4" scallop circle and 2 3/8" scallop circle.  The larger layers are Circles #2 and Scallop Circles #2 dies.

This card is so alien to me; I haven't done a bright, "fun card" for a long time.  I showed it to Rachel, and she actually thought it was cute.  We agreed it would be perfect for a child's birthday.  She's my sounding board; any time I have a card I'm not sure about, she gives me ideas on how to fix it.  It's like having my own art consultant.

Mike & I were running errands tonight, and both boys were gone when we left, so I scribbled them a note – "Running errands – pics, groceries, Costco."  Jonathan called me when he got home and said, "Mom, (actually, I think he called me "dude."  Dude???) you seriously have to work on your handwriting."  Apparently he thought "pics" was "pies," and was very excited that I was going to buy some pies until he realized we were taking pictures.  I used to keep snacks around the house, but my guys devour them all in the first day or so – especially the big guy!  Sometimes, though, you just need a little snack – like a pie or a Twinkie.  This is how desperate I was today.  I had bought a pack of sponge cakes for strawberry shortcake a few weeks ago.  (Yes, weeks.  So sad.)  There was one left over – and there's so much preservative in them, they never go bad, so I decided to make a homemade Twinkie.  I filled it up with whipped cream and folded it over.  Pathetic.  Not at all like a Twinkie, and not very good.  But, sadly, I did eat the whole cake.  After Jon's message, I bought two small pies at the grocery store, so if I have a snack attack tomorrow (and if they're still here…), I can have pie!  We even have some sugar free vanilla ice cream we bought the other day to make "Coke Zero Floats."  Not quite as rich and creamy as the real thing, but they do cool you off.

So all this snack talk is making me hungry, and I should be going to bed.  Thanks for stopping in!  I have a new hydrangea card for tomorrow.